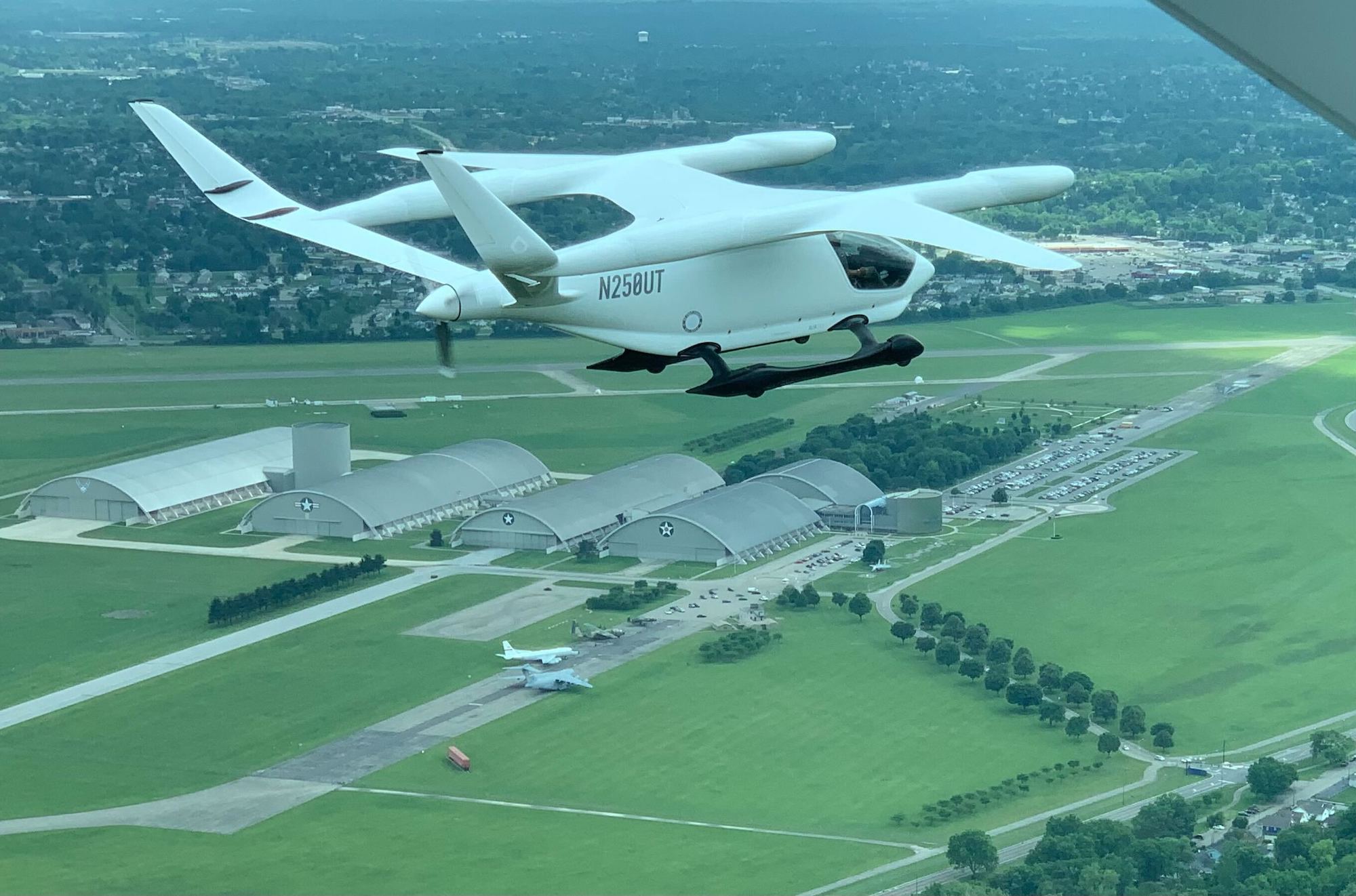 On the morning of Monday, May 23, an electric aircraft took off from Plattsburgh International Airport in eastern New York, near Lake Champlain and the border with Vermont. From there, it pushed west and south. It landed and took off again two more times in New York, and then flew into Akron, Ohio the next day. After seven stops in total, it finally landed on Monday, May 30, in Bentonville, Arkansas, completing a start-and-stop journey of 1,403 miles.

The craft is called Alia, and it was created by Beta Technologies, an aviation startup based in Burlington, Vermont. A single propeller, powered by two electric motors, gives it its thrust through the air. Electric aviation is in its infancy, and the burgeoning industry—which includes other firms like Joby, Wisk, Kitty Hawk, Archer—has generally focused on the idea of using electric aircraft as air taxis, like Ubers in the sky, for travel around cities. With this longer series of flights, Beta CEO Kyle Clark says that they wanted to show that aircraft like these can be more than just a vehicle for local transport.

“I think that with this type of flight, at a very high level, we change the image of what electric aviation is,” he says. “It’s not an aircraft that’s hopping within a city; it’s not flying test flights around a range, unmanned; it’s you put a couple pilots in it, you put some cargo in it, and you go halfway across the country.”

He says that the “launching point” for their business is to start with a focus on flights for cargo and logistics that span about 150 miles in length. “And we just went and proved that you can do that, and you do it over and over and over again,” he says.

After the stop in Akron, Ohio, it flew to Springfield, Ohio, then Bloomington, Indiana, before pushing into Illinois, Missouri, and then Arkansas. The flight legs ranged from about 159 miles to as long as 211, and had an average flight time of around 88 minutes. All told, over the eight days that the mission lasted, the aircraft was in the air for nearly 12 hours.

Two pilots from Beta took turns flying the aircraft: Lochie Ferrier and Camron Guthrie. The pilot not flying the electric plane for each leg took the controls of a Cessna Caravan that acted as a chase plane.

Guthrie, one of the pilots for the mission, notes that the journey took them through “really sleepy areas” of the country, attracting onlookers. “People just came out to see the folks from Vermont and their spaceship,” he says. In Ohio, the landing garnered an article in the Springfield News-Sun about the aircraft, which arrived at the Springfield–Beckley Municipal Airport on May 24. The website Electric VTOL News previously reported on part of the aircraft’s journey.

To be clear, the flying machine is not a spaceship. It’s an electric aircraft with a 50-foot wingspan that The New York Times has referred to as “a flying battery” that has an “exotic, almost whimsical shape.” (The company notes on its website that the plane’s design “takes inspiration from the Arctic tern.”) While Beta and its competitors are designing aircraft that can take off and land vertically from small areas, this particular model did not do that—it took off and landed like a regular airplane, just as it did in March when two Air Force pilots tried flying it.

The journey also included a delay due to bad weather in Ohio. After landing in Springfield on Tuesday, May 24, it didn’t take off again until Saturday, May 28, when it flew to Indiana. The multi-leg journey was a chance for real-world testing of a new kind of aircraft. “We ran into weather, we operated out of austere locations, we tested our recharging network,” Guthrie says. “There’s a lot of things we learned about our design that we’ll put back in the hopper.”

About the charging network: An electric aircraft produces zero tailpipe emissions while flying, but the juice in its batteries has to come from somewhere. For this journey, Beta says that they were able to recharge the aircraft using their own charging stations at four locations, including their departure airport of Plattsburgh, New York. (Another charger is located in Bentonville, Arkansas.) At other locations, they relied on a mobile generator that can burn fossil fuel to make electricity. “We try to minimize that, but yes, we have those provisions, and we used it on this flight,” Clark notes.

Ferrier, one of the two test pilots, says that one issue driving where and how they charged was the performance of the aircraft, which he says exceeded their expectations. “Our charging network was actually spaced for a little bit less range than we’re currently making,” he says. “The airplane is actually outperforming the charging network—so we could have actually used more of our own charges, but we ended up with a better airplane than we expected, and so we had to skip some of the charges.” In short: briefer flights would have allowed them to utilize more of their stationary chargers instead of their mobile solution.

“The charging network is an evolving thing, and every week we get more chargers online,” adds Clark.

The permission for this multi-state journey—the aircraft soared through six states in total—came in the form of a market survey certificate from the FAA. It’s not the longest flight on the books for an electric aircraft: between 2015 and 2016, a solar-powered airplane circled the world.

Beta doesn’t intend to operate its own cargo or passenger airline; instead it plans to make the aircraft itself so that companies such as UPS could use it to carry goods.

For now, the Alia aircraft, after flying just over 1,400 miles, remains in Arkansas. It will be at an event called the UpSummit, and then will eventually fly back east.

Watch more about the flight, below.

An electric aircraft just completed a journey of 1,403 miles