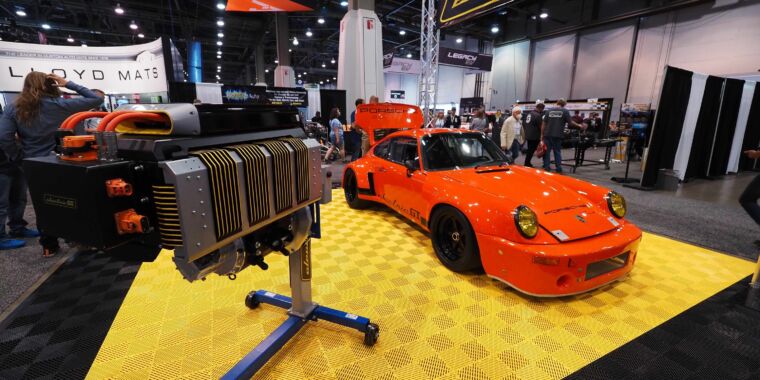 Las Vegas is currently hosting the annual SEMA event, the aftermarket automotive trade show. Hot rods and custom cars have always been a SEMA thing, but these days there’s no guarantee you’ll find a brawny V8 or even any cylinders under the hood. In the past, we’ve covered show cars from Ford and Chevrolet, but this year, the electric custom car is a full-blown trend.

Of course, the big OEMs haven’t ignored SEMA in 2021. Ford is still in the first flush of Mustang Mach-E mania, and the Blue Oval brought multiple Mach-Es to the show. One is an aggressive-looking Mach-E GT that will be auctioned for charity after hopefully hitting 200 mph (321 km/h) at Bonneville, and another is bright orange with lowered air suspension and an e-bike charging rack at the back.

But the car that really caught my attention is a Shelby Mustang Mach-E GT concept, complete with the iconic white-with-blue-stripe livery. I’m not sure it’s any faster than the Mach-E GT Performance Edition that recently brightened my day, but it does look even better, with graphene-infused carbon-fiber bodywork.

The Shelby Mach-E GT also has retuned magnetorheological dampers and is fitted with carbon-fiber springs. Its Pirelli P Zero performance tires have been swapped for a set of Michelin Pilot Sport EV rubber. Ford is not saying if there will be a Shelby version of the Mach-E, but if there is, I hope I get a chance to drive one.

It was actually another electric Ford that captured the headlines yesterday, however. The Ford F-100 Eluminator started life as a 1978 F-100 pickup, but it’s now fully electric, powered by a pair of the same electric motors you’ll find in the Mustang Mach-E GT.

Keeping with the snake theme, how does an electric Cobra with 1,500 lb-ft (2,034 Nm) sound—other than potentially terrifying? Superformance has been Cobras for quite some time now, but this might be the first time the company has made one without a V8 heart.

Tesla power is also at work inside Kevin Erickson’s 1972 Plymouth Satellite. The sleek silver coupe looks much more up to date than its 49 actual years would have you believe—probably a consequence of the new front treatment and some modern alloy wheels.

It has 600 hp (447 kW) to call on, supplied via 102 kWh of Tesla battery packs, which are cooled via the Satellite’s air conditioning system. With so much power, it’s not surprising this Plymouth can hit 60 mph in four seconds, but it also manages to get 250 miles (402 km) of range, making it longer-legged than at least a couple of new EVs we’ve tested recently.