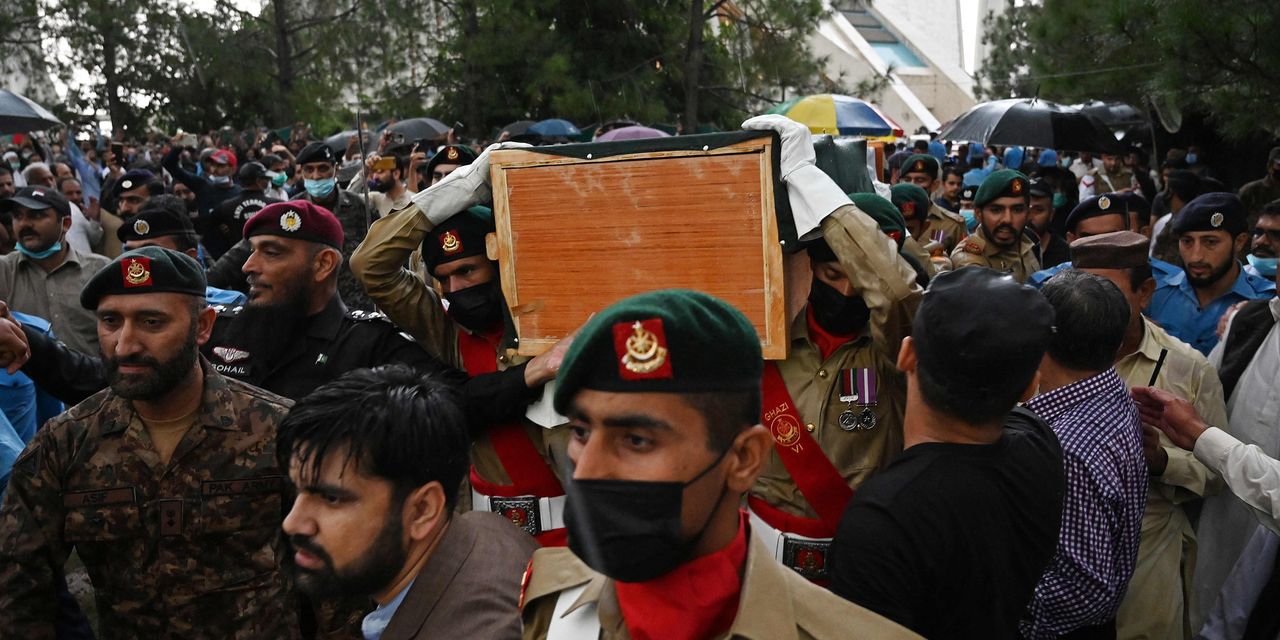 a Pakistani scientist who shared nuclear-weapons technology and know-how with countries the U.S. regards as rogue states after helping his country build its first atomic bomb, died Sunday. He was 85 years old.

At home, Dr. Khan was widely seen as a hero for making Pakistan the only nuclear-armed country in the Islamic world and giving it a deterrent against its rival, India, which also has atomic weapons.

Abroad, he ran a clandestine network selling nuclear-weapons technology. Libya, Iran and North Korea, all hostile to the U.S., were beneficiaries of his expertise.

Pakistan gave him a state funeral Sunday, and the national flag was ordered flown at half-staff.

Prime Minister Imran Khan praised Dr. Khan for his “critical contribution” to making Pakistan a nuclear-weapons nation. “This has provided us security against an aggressive, much larger nuclear neighbor. For the people of Pakistan he was a national icon,” he said on Twitter.

Dr. Khan died of breathing difficulties following an infection with Covid-19, doctors who treated him said.

Feroz Khan, a former official in Pakistan’s nuclear-weapons program who is now a professor at the Naval Postgraduate School in Monterey, Calif., said Dr. Khan was able to set up a world-wide network to acquire the equipment needed and then managed the assembly of a bomb.

“Without Dr. A.Q. Khan, Pakistan would not have had nuclear weapons,” the professor said. “But his loose behavior also endangered the Pakistan program.”

Having used his network of businessmen and companies for Pakistan to acquire nuclear technology in the 1970s and 1980s, he later put that same web into reverse to sell the know-how to other countries for personal profit, he said.

Mushahid Hussain, a senator who was information minister in 1998 when Pakistan tested its nuclear weapon, said Pakistanis thought Dr. Khan saved the country not only from India, but also from the U.S. after the Sept. 11, 2001, attacks, when Washington went to war with Afghanistan and then Iraq.

Pakistan was the main supporter of the Taliban regime, which had hosted Osama bin Laden. Being nuclear-armed meant Pakistanis felt that they were much less likely to be attacked, he said.

“A.Q. Khan is an authentic Pakistani hero. He defied the world, he defied the odds, he showed it can be done by a Muslim, by a Third Worlder,” said Mr. Hussain.

“It pains me to realize in retrospect that my entire lifetime achievement of providing foolproof national security to my nation could have been placed in serious jeopardy on account of my activities,” the scientist said in 2004.

He lived the rest of his life in his comfortable villa in a leafy part of Islamabad, under the guard of heavily armed military personnel. Pakistani officials say they feared he could be kidnapped by foreign intelligence agents and interrogated. They allowed no outside access to him by nuclear inspectors.

He was never charged with any crime. By 2008, he said that he was pressured into making the 2004 confession. Friends say he felt badly treated by Pakistan.

Michael Krepon, co-founder of the Stimson Center, a think tank in Washington, said that Dr. Khan “took one for the team,” taking the blame for the sharing of technology abroad. Mr. Krepon said some of the proliferation was officially sanctioned, but other sales were Dr. Khan’s own entrepreneurship.

He said that by now Pakistan is estimated to have built more nuclear warheads than India.

A personal, guided tour to the best scoops and stories every day in The Wall Street Journal.

Pakistan has 165 nuclear warheads, compared with 156 warheads for India, according to an assessment publish this year by the Stockholm International Peace Research Institute.

“The system that A.Q. Khan built does not have a closedown switch,” said Mr. Krepon.

It was the 1971 war with India, which saw half of Pakistan split away, that convinced Pakistan that it needed nuclear weapons, as it would always be outgunned with conventional forces. In 1974, India tested its nuclear weapon.

The man with the plan of how to achieve that aim was Dr. Khan, who approached the Pakistani government. He was a metallurgical engineer, not a nuclear scientist, then working in the Netherlands at a company operating a uranium-enrichment plant. He stole the designs to the centrifuge technology and went back to Pakistan in 1976 to join the secret program to develop nuclear weapons.

He was to go on to overshadow the many other scientists who played key roles in developing the Pakistani bomb, heading the program and wielding enormous power with few checks.

In the 1980s, Islamabad was a close U.S. ally in a joint venture to sponsor Islamist insurgents against the then Soviet invasion of Afghanistan, with Washington choosing to ignore intelligence that Pakistan was developing nuclear weapons, Mr. Krepon said.

Eventually it was Libya in 2003 that provided details of its dealing with Dr. Khan to the U.S. That blew open his operation selling nuclear technology. By then, however, Pakistan was again a key U.S. ally, in the “war on terror” against al Qaeda and the Taliban, and pressure from Washington on Islamabad was limited.

Toby Dalton, co-director of the nuclear policy program at the Carnegie Endowment, a think tank in Washington, said that Pakistan’s nuclear weapons had deterred a further major war with India, but the cost of the region’s focus on security expenditure, at the expense of economic and social development, was steep.

“Until leaders decide that the human development costs of arms racing are no longer sustainable, the race will continue,” said Mr. Dalton.