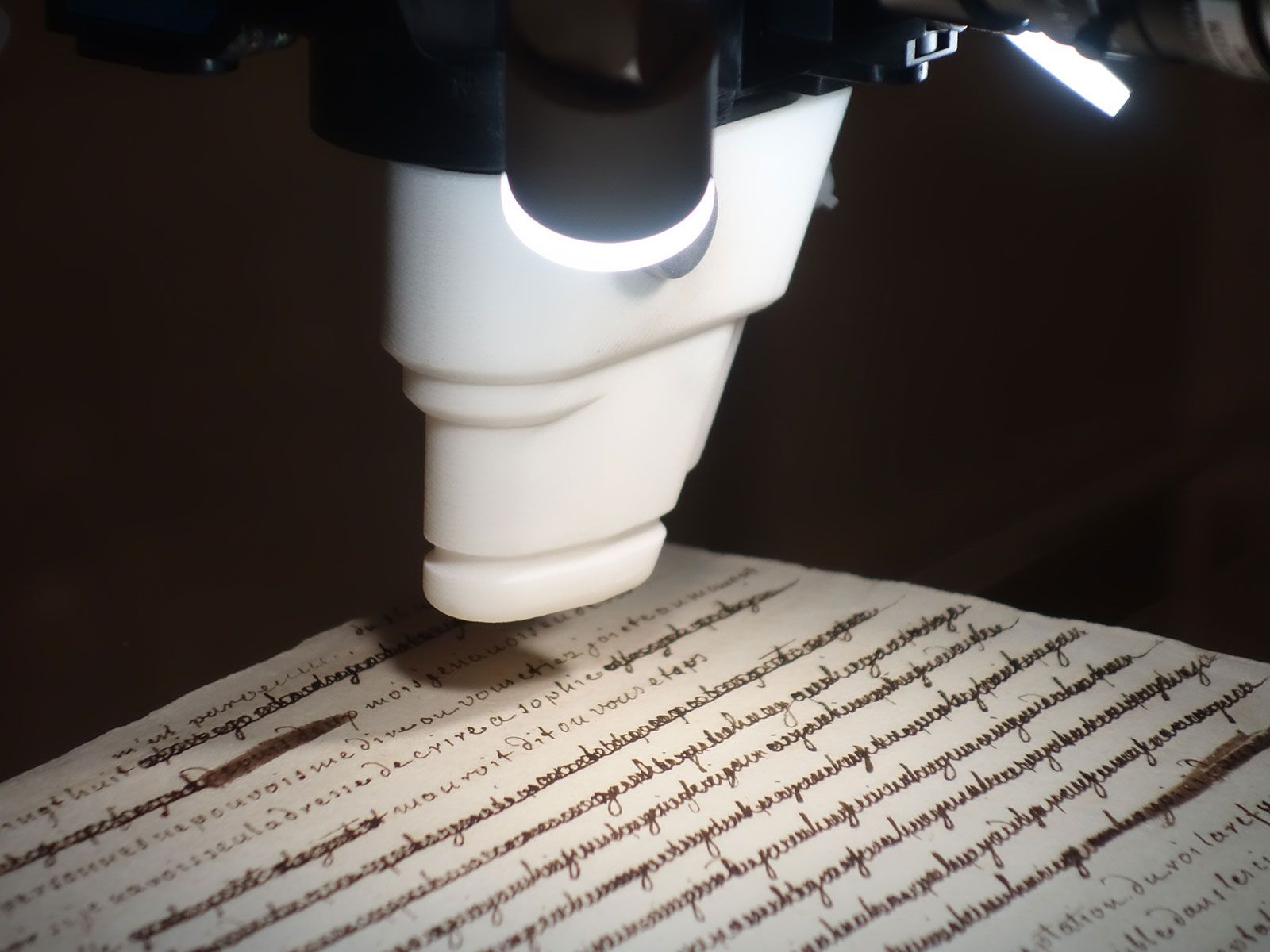 “I will finish not without telling you my dear and loving friend that I love you madly and that I can never be a moment without adoring you.”

During the dangerous days of the French Revolution, in January 1792, Marie Antoinette, queen of France, closed a letter with these tender words. But that letter was not meant for her husband Louis XVI. Instead, her intimate friend and rumored lover Swedish count Axel von Fersen was the recipient.

The pair’s relationship demanded discretion. So did political aspects of their correspondence. The letters were exchanged while the royal family was being held under house arrest by the revolutionaries controlling France. Both Marie Antoinette and Fersen were pulling political strings in the hopes of salvaging the Bourbon dynasty, or at least saving the royals’ lives. For one or both of these reasons the few surviving letters between them are sprinkled with passages, like the one above, that have been blotted out by some unknown censor. By blacking over words and entire lines with dark ink someone meant to hide them forever from history and they succeeded for two centuries—until now.

Modern technology has foiled some of the censor’s efforts. Anne Michelin, a physical chemist at the French National Museum of Natural History and colleagues have used old fashioned hard work and new techniques that plumb the varied composition of different inks to uncover many redacted parts of this famed correspondence. In doing so they believe they’ve also revealed who wielded the heavy-handed pen. The mystery censor appears to have been Fersen himself. Michelin’s study, published today in Science Advances, also demonstrates a methodology that may recover countless historical correspondences, official papers and drawings—and it might even help to analyze fossils.

Between June 1791 and August 1792 the French royal family lived under a form of house arrest at the Tuileries Palace in Paris while Fersen was abroad. Their confinement followed a disastrous failed attempt to escape Paris orchestrated in large part by Fersen. The royals hoped to rally supporters in rural France and seize power from the revolutionaries. Instead, the family’s flight and arrest at Varennes turned popular opinion decidedly against them and opened them to charges of treason. During this period, while under heavy guard, Marie-Antoinette conducted a complicated correspondence with Fersen. Letters were delivered by intermediaries but also hidden by extravagant precautionary methods including invisible ink and codes that required complicated deciphering.

Marie-Antoinette even complained about the process to Fersen on November 2, 1791, writing “Farewell, I am getting tired of ciphering; this is not my usual occupation and I am always afraid of making mistakes.”

Secrecy was critical for several reasons and historians have long wondered who crossed out various parts of the text. The influential Fersen had fled France after his role in the failed escape was discovered. In Brussels, Vienna and elsewhere he desperately lobbied to influence foreign powers, including relatives of the royals, who might help to restore them to the throne or otherwise aid their plight. Such political intriguing, mentioned in the letters, would have been considered a deadly serious crime by the revolutionaries.

Other sections had a different reason for being hidden. They are evidence of a very personal correspondence between the queen of France and a man who was not her husband.

Many of the letters written by Marie Antoinette during this period were destroyed. But Fersen kept some letters received from the queen, as well as copies of those he wrote to her. They were held by several generations of his family before finally being purchased by the French Historical Archives in 1982. During all that time the redactions puzzled those who read these letters.

Although they look the same to the eye, inks from the late 18th century weren’t uniform. Michelin’s team used X-ray fluorescence spectroscopy, a nondestructive analysis, to delve into their chemical composition. When excited by X-rays, elements produce unique fluorescent ‘fingerprints.’ Using the technique, the researchers mapped the distribution and ratios of different elements in the inks of the original letter writers and of the unknown censor.

In 8 of the 15 redacted letters the scientists uncovered consistent differences between the inks of the original text and the redactions, with copper-to-iron and zinc-to-iron ratios being the most revealing. Mapping these elemental differences allowed researchers to distinguish between the two inks and made the redacted words more readable.

But that wasn’t always enough to reconstruct words. In harder to decipher sections the team employed data processing applications, using statistics to further sort out their findings. Once they’d identified the slightly different elemental compositions of the different inks, they trained algorithms to produce images that maximized those differences and thus made the text more legible.

All of the letters penned by Fersen also shared very similar ratios of ink elements, meaning they were written with the same ink. This revealed that some of the letters from Marie-Antoinette were actually copies of the originals, which were written by Fersen in that same ink. The same ink was also used by the mysterious censor, strongly suggesting that it was Fersen who chose to blot out sections of the correspondence forever. “The coincidence was too big!” Michelin explains. “In addition, on one letter, Fersen added a few words above a redacted passage (his handwriting was confirmed by a specialist) but with an ink of the same composition as the redaction ink used on this same letter.”

“It’s a remarkable work,” says physicist Uwe Bergmann at the University of Wisconsin-Madison, who wasn’t affiliated with the research and is an expert on X-ray imaging of ancient materials. “I think they were tenacious, and I think it will have an impact on people who use all kinds of imaging techniques and can learn from the application of these approaches to get exceptional results.”

Bergmann was part of a team that famously used X-ray technology to uncover once-lost and unreadable works of the legendary mathematician Archimedes.

The nature of Marie-Antionette and Fersen’s special relationship has been debated for more than two centuries and was a topic of conversation at the court. In historian Evelyn Farr’s book on their correspondence, I Love You Madly, she uncovered a letter written from Fersen friend Quintin Craufurd to British Prime Minister William Pitt. “This gentleman was Colonel of the Royal Suédois; was Her Most Christian Majesty’s prime favourite; and is generally supposed to be the father of the present Dauphin,” Craufurd wrote.

Some have construed such comments as proof that the pair had a physical relationship, while others dismiss it as court gossip or even political slander. No smoking gun exists in the redacted comments; but there is definitely further evidence illustrating just how close the two star-crossed aristocrats really were. Their endearment was so strong that Fersen himself felt it prudent to blot out some of the more private terms of endearment including ‘beloved,’ ‘tender friend,’ and ‘adore.’

“The redacted passages are the most intimate passages of the correspondence,” Michelin explains. “Fersen probably wanted to keep this correspondence, important to him perhaps for sentimental reasons or political strategies, while protecting the queen’s honor and perhaps his own.”

The team hypothesizes that Ferson removed what he felt were the most compromising passages, though he may not have completed the process through the entire folio of letters.

The process used to recover the redacted and once-lost texts could be in high demand. Archives around the world are stacked with diplomatic and political documents, notable letters and other pieces of history in which carefully redacted items might be revealed. Michelin notes that studies have already used the technique to delve beneath paintings and uncover the underlying drawings, or first versions, that would otherwise remain lost. And Bergmann’s group even teamed up with paleontologist Peter Lars Larson to study feather and bone chemistry in the Archaeopteryx, a key fossil on the lineage of dinosaurs and birds.

As for Marie-Antoinette and Fersen, we may never be absolutely certain how far their relationship went.

“Ultimately, in my opinion, I think it doesn’t really matter if their love was consummated,” says College of William & Mary historian Ronald Schechter, who is studying Marie Antoinette’s library and reading habits. “Even if it was consummated, they still lived with this level of frustration in not being able to see each other, and anxiety in worrying that they were both in danger. It’s not the kind of love story with a happy ending.”